There is a saying that you cannot throw a stone without totalling a Windows computer. The saying is, in fact, true. Windows is perhaps the most widely used OS when it comes to home and office PCs. Linux, the arch-rival to Windows, is somewhat more common in computers that belong to developers and network administrators. Windows, especially, is so commonplace we don’t realize the place it has in our lives. Over the years, the operating system has made notable advancements in the field, growing ever stronger with each generation. Who has not heard of Windows XP, Vista, 8, 8.1 – and the youngest of them all – Windows 10.

However, there are versions of Windows that aren’t very popular among home and office users because they have been written keeping in mind advance developer’s needs. These versions are namely – Windows Server 2012, 2019, etc.

Windows Server 2012 is way too advanced than all of its predecessors, but nowhere as advanced as the 2019 release, a beast in itself. Understanding the capabilities of Windows can help administrators have their job simplified.

So, we thought of coming up with a comprehensive and one of kind tips and tricks to make intermediate administrators look a lot more professionals –

If you are running Windows Server on a VPS, you’d deem this trick as the day saver.

In Windows Server 2012, Server Manager is one of the things easiest to notice. Microsoft has combined both server and features installer into one. This would now save you the extra trouble you had been undergoing installing them one by one.

Server management roles can be assigned by clicking Manage and then Add button. The management tools and the tools to edit server roles are all listed in the same window. The server manager is intelligent enough to know how to list the appropriate groups.

You can combine two or more adapters and increase the availability of your server and, thereby, its speed and performance. This functionality is built to the core in Windows Server 2012.

As the administrator, you can easily team up several adapters together – via network cards – without needing to add any specific tools.

If you haven’t tried it yet, make sure you do now, once you have read this article. Teaming network adapters together will need you to enter the server manager option. There on, you will need to find the local server menu, find the adapters that are compatible and then link them to one another, right-clicking and selecting the features menu will do the job.

The start menu has been the cliché for Windows. Microsoft never tried to do away with the start menu until Windows 8, which met with a lot of criticism. The bill gates-run billion dollars enterprise then realized the Start Menu is a feature adorning Windows OS, and never tried modifying it again. Though with every release a new Start menu was introduced, the idea has remained the same – more or less.

In Windows Server 2012, the start menu is just as robust as in any normal OS. Clicking on the start button can unlock an entire arsenal of tools, made available to you in a click’s notice.

If you aren’t using the start menu already, it is about time you used it. With the recent programs listed at the top, you will not need more than a few clicks. Unused programs are highlighted, making it easier to spot applications you have never used even once.

The start menu is a Windows classic. It’s easily accessible through the stylized Windows icon in the corner of your screen. Click on it, and you get a layout of your most-used programs, access to power options, and shortcuts to your file explorer and computer’s settings. Change the start menu’s appearance when you right-click on the icon instead. If you’re using a touchscreen, then just touch the icon, hold it down for a second and then release.

You can rearrange what you want programs you want on your screen and where. You can put frequently accessed tools such as Task Manager, Control Panel and Device Manager within reach. Or, if there are programs that you access every now and then, you can easily arrange them in the Taskbar or where you think they are the most accessible.

What good an administrator is who cannot boast of his grasp of command lines?

The longer you are in the business, the more commands you are likely to come across and pick. Being a network administrator myself, I know nothing is more satisfying than pulling off operations using commands instead of clicks.

Commands are intended to offer more control and save time. Below are the commands you can make use of during your regime-

1. Listing all groups in the domain

You can quickly pull out a list of all the groups in the domain along with the members participating in it.

To do so, type in the command below –

We all realize how important it is to reset your password. However, there could be users whose accounts might have been set with non-expiring passwords. At some point you would want to know who these users are, and here’s how you can do it.

In order to all list everything with FSMO role, run the following command –

4. If your brain has already been blown by the above three commands, command 4 will blow what’s remaining of it.

READ Also:  What is virtualization and how does it work?

Who’s not up for some fun? Even on a windows VPS terminal, you can try having fun without jeopardizing any applications whatsoever.

When you have a number of application windows lined up or stacked, and want to declutter them all, at once:

If you are running VPS with Windows installed on it, mind you, you are in luck.

The newer version of Windows Server 2012 will allow you to easily assign roles to VHD (virtual hard drives). You can now set these small VHDs as iSCSI targets over the internet.

The feature can be enabled by assigning some key roles in the server manager option and undertaking suitable actions under the Files and iSCSI tab.

The new GUI for Windows Server 2012 might be missing on a few important things that were previously present. Despite the OS being stripped off the Internet Explorer, the command-line tools have remained intact. But, there are options to optimize the GUI from the server manager option while also choosing the functionalities you want to retain or ditch.

In a nutshell, you will have three options –

Ideally, you should not lump computers and users in the same organizational unit (OU). Instead, plan to create a new OU each for users and computers. 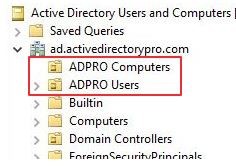 Having done that, the next step should be creating OU for each department.
Remember to do this for both user & computers. 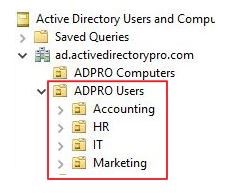 Next in the queue is creating OUs for certain specific functions. Here are a few things you can dabble with and try an exercise yourself.

Here’s an illustration on how you can create OU for each of these functions. 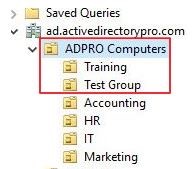 That’s it for organizing users and computers. It’s very simple, flexible and easy to navigate.

You should not put security groups into folders, no matter how much sense they make. Doing so would be a hurried-decision and will not make actual sense to anything.

However, if you still did so, you’d be left with groups that would not be department specific.
These groups are likely to end up at a place where no one would be able to find them.

To avoid this inconvenience, simply create a group for just security groups. This might sound as daunting but it all makes sense.

Like user, computers and now security groups, you can create as many OUs for as many things you like.

This works as great as you would expect.

READ Also:  What Are The Benefits Of Choosing Windows VPS Hosting Over Other Hosting Solutions

Thanks to the reorganization, I now know where all my groups would possibly be. Every time I come across a component I cannot move into any of the existing groups, I simply create a new.

Creating and editing as you move is the key to manage the design of your Windows VPS.

Group policies are just too robust to be taken irresponsibly. A small change in the group policy can result in a number of conflicts so system administrators almost always shy away from using it.

Server configurations are oftentimes managed and scripted manually, and those are as labour-intensive tasks as anything can be.

Group policy is a key part of Active Directory and is used to create GPOs that ultimately define configuration and security settings for the server. GPOs are then applied to the OUs on your windows VPS and can be filtered out by AD groups. Care must be taken while allotting GPOs. Not only can wrong scripting render your entire server useless, but you’d also never know whether the admins are left with enough privilege to revert back those changes. Make sure to delegate GPO rights to only the qualified members of your IT team, or else you would end up putting the entire server in jeopardy.

Should you care about domain controllers?

The domain controller closest to your client should be the one that gets you worried the most. First, these controllers will neither have the GPOs nor their changes. Second, the management and monitoring of these tools require a different approach and tool. The GPMC (Group Policy Management MMC Tool) is a free tool that has remained in business since long.

Choosing the ideal domain controller is key here. First, you need a tool you are the most familiar with. Second, the tool should be compatible with the OS running on your VPS server. You cannot run windows application on a Linux OS, can you?

It is easy to discover which DC you are updating while on the GPMC. It is the PDC emulator by default. You can easily discover the PDC by opening a terminal (or command prompt) and typing the following command –

The above command will display five operations master roles. You are then left to launch the Users and computer Active directories (something I am sure you can handle on your own).

That wraps up everything we had to say on managing windows VPS. We hope you have understood everything on the list. We won’t be surprised if you already knew most of what we have listed. If there’s anything you think we might have missed, you can drop a comment below and we’ll make sure to include the next time we update this blog – we update our articles very frequently. All the sources have been cited and linked to (wherever applicable).

Disclaimer – While every effort has been taken to keep the information as relevant and correct as possible, Go4hosting does not guarantee the credibility of the information provided and shall not be held liable for any loss arriving thereafter.