We have engineered a scalable, secure and customizable Windows VPS that has performance coded to its very core. Our simplistic and meticulous coding ensures that your websites perform as if you were on a physical machine. You no longer need expensive dedicated servers when you can get similar performance at a fraction of cost.

What is Windows VPS Hosting?

Windows VPS hosting is a cogent solution for companies and individuals that run higher-traffic websites and more complex applications in a highly secured environment.

Experience Beyond the Barriers of Cheap Windows VPS

Our Windows VPS plans are available across many business verticals. We deliver affordable and light-weight Windows servers at throw away price. Choose to buy windows VPS from us and get hosted on the most competitive hosting platform ever. 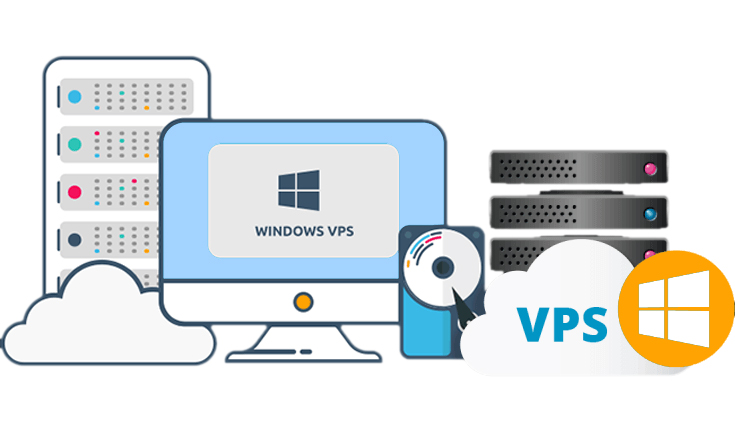 Fully-Managed VPS Now at Your Fingertips

With us you can choose any version of a Windows operating system to run on your power-packed virtual private servers. Our Windows VPS delivers unmatched performance, giving you complete administrative control (SSH access) to upload, install, and configure requisite software applications as per your business needs. Get full control of your servers and change as per your requirements.

Without manual migrations, it gives high scalability to raise RAM, CPU, and storage.

Why Buy Windows VPS Hosting Server from Us?

We offer many various Forex Windows VPS Plans. You're bound to find one that matches your business's unmatchable requirements. Or, if you are not able to understand the appropriate choice for you then just let our experts assist you to find out what you want. Our Windows VPS systems are scalable, in order that they can grow as your business thrives and your needs boost.

We provide better administrative access for VPS so that you'll install almost any web application on your VPS. Go4hosting low-cost windows VPS is more reliable than any other company’s Shared VPS servers.

Along with servers, our Windows VPS servers also give you the idea for system resource management and allocation. You get the best process for your business also without any security risks. Hence, you will get Quality Windows VPS hosting services with SSD cloud and the best Windows VPS hosting India options at a budgetary rate.

Choose to host your Windows VPS servers with Go4hosting and open up to a world of possibilities.

We are the pioneers of affordable Windows VPS hosting in India. Our services have made a mark for being the best in business and we live up to all expectations. You wouldn’t find better price and quality elsewhere.

With free set up, free weekly backups, and full-root access, our Windows VPS has been designed with cost-effective characteristics in mind. We guarantee our clients fixed resources with multi-processor Xen instances, combined with dedicated IP address. Packed with premium bandwidth, Windows VPS server will not let you down at any moment; 1 GBPS connectivity will further reinforce your trust in us. Our Windows VPS hosting comes inbuilt with hexa core Intel CPU, so you would have no troubles streaming graphics to your workstation. Go4hosting understands what value your server uptime holds. Our VPS Windows hosting has been configured by the industry-best professionals who know the tech inside-out.

Our Support team is at its toes

To double-sure the server runs into no glitch, our support team is at its toes and live 24/7. At any moment you feel your Windows VPS is not performing the way it should be, we have experts to hear your say. With customer-centric approach, intuitive control panel, and the liberty to opt either managed or unmanaged service, Go4hosting has long proved its credibility as the best Windows VPS hosting provider in India.

Check this before you host with any other provider

Check whether your Windows VPS provider provides the following features

Go4hosting is the provider of cheapest Windows VPS hosting in the entire hosting marketplace. They even provide free 7-day trial just so that you know you are investing in the right provider.----Rijo C.

My current VPS is, without doubt, the best Windows VPS server ever. It runs pretty smoothly and I haven’t had any complaint so far in the six months of service. Uptime is pretty decent. ----Jay Kumar

They offer 99.95% uptime assurance. I didn’t get to check it but I think they are pretty close to that figure, maybe at the higher side. I faced some issues at the start though but once things had fit in, I haven’t had to complain again.----Anurag Basu

I recently bought a Windows VPS server from Go4hosting and would recommend that you do the same. It has been more than three months and I am amazed at the speed at which my website is loading.----Manoj

Their VPS servers are pretty decent. I have both Windows and Linux servers from Go4hosting and have had a great experience so far. I think the Windows one is slightly more finely tuned than the Linux one. All my important apps are on Windows VPS, whereas files on Linux. Would recommend both Linux and Windows to anyone looking for cheap VPS hosting provider.----S Gairo

I recently upgraded from shared hosting. I was looking for an unmanaged VPS but Go4hosting only offered me managed, although in a similar price range. I chose to go with managed because the differential price was too small. The managed service is nearly as good as the unmanaged and offers similar control. I would recommend that you go with managed because Go4hosting’s managed costs the same as unmanaged hosting from other providers.----Raman Sharma

The technical team is very cooperative and so is their support. I was given a dedicated account manager so troubleshooting problems was never an issue.----Ash K

Can I host a website on virtual private server (VPS)?

Yes. You can host websites on VPS the same way you host on any other server. VPS enables you to have dedicated resources in a shared environment.

Does my business need VPS hosting?

You need VPS hosting if your business has outgrown shared server. If you are starting an application that need dedicated memory, VPS is a good way around it.

Are there free VPS providers?

VPS providers offer trial service period during which you aren’t required to pay a fee. Post completion of your trial, however, your service is charged based on the provider’s guidelines.

How can I format my VPS?

To format your VPS, login to your control panel and navigate to the option that says “destroy or re-deploy”. You can alternatively click “Destroy” and “rebuild” to achieve the same.

2. Type in the IP address of the Windows VPS you received.

3. In the window that appears, insert your username and password.

You are now connected to your Windows server.

Can I run Windows VPS on a Linux machine?

You can run Windows servers on Linux computer and vice versa.