Drupal is popular open-source content management software(CMS) which can used by individuals or group of users—even those lacking advanced technical knowledge to create different types of websites. Distributed under the GNU General Public License, Drupal is written in power programming language PHP. Originally written by Belgian student Dries Buytaert as a message board, it became an open source project in 2001.

Today with a highly active and versatile community of over more than one million members and over 30,00 developers powers some of the most prominent websites in the world ranging from personal blogs to corporate, political, and government sites. Drupal is considered to be a competitor to other popular CMSs like WordPress and Joomla. 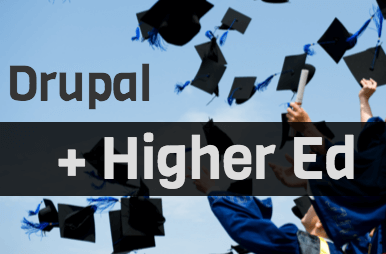 Nowadays Drupal has become the CMS of choice for a large number of leading schools in USA and the world. Drupal has become the preferred website platform for hundreds of education institutes across the globe. Top names in the education world like Harvard University, Brown University, Oxford University, University of Prince Edward Island, Yale University, Zaman University, Duke University, Stanford Law school, etc have settled upon Drupal as their favoured content management framework owing to its host of features which seem to be competent enough to efficiently take care of the present and foreseeable needs of teachers, students, members, alumnus, etc. To put it in other words, Drupal contains all the requisite features which makes acquiring and dispensing knowledge simple and effective as well as running a top quality institute efficient.

It is usual for large colleges and universities to have a multitude of websites serving different needs and purposes. By taking advantage of Drupal’s built-in multi-site functionality, educational institutions find themselves in a unique position to establish communication with staff members, students, faculty and other concerned authorities by way of a single system.
Multi-site functionality of Drupal allows higher institutes of learning to efficiently manage information by giving the control of individual websites to concerned departments. This significantly reduces the burden of IT department and firms are spared the cost of maintaining and managing a large and complex IT infrastructure.

Research studies show that around 90 per cent of college going students in USA own a smartphone. Now with Drupal 8 and its high adaptability feature, academic data centers can deliver latest and up-to-date information on mobile phones of their students. Drupal sites easily adopt to user to user evolutions, making it the preferred choice for larger students which attract students from different countries and race.

Drupal’s Workflow modules and features keeps the ball rolling smoothly by efficiently controlling and managing the publication processes. Availability of a granular control for content management allows team members to smoothly carry out the tasks assigned to them by preventing overlapping; this keeps the project moving forward without hassles and delays.

Drupal 8 is now available in more than 100 languages. This happens to be a real gift for reputable institutes who have a varied demographic. Drupal allows them to simply manage their sites in different languages for better communication with their students as well as on an international level.

It is common for academic institutes of higher learning to have in place an authentication system for emails or other internal accounts. With Drupal using LDAP and CAS, it is easy to create a single sign-in point for access to different resources. This immensely helps in providing a guarded environment for officials who may often need access to multiple resources of the institute through a single login.

An extensive community network and support

As mentioned above, Drupal has a huge community of active supporters (contributors, developers, evangelists, business owners, developers, etc.) all across the globe. There is a large number of community support for questions and queries related to higher education. Students can get in touch with this versatile Drupal community groups active across the globe to find satisfactory help and support.

Some community group examples are:

Drupal’s powerful feature facilitates fast track editing. An educational institution carries out numerous activities on daily basis and needs a system which can help it carry the information to the intended recipient as quickly and efficiently as possible. School event locations, functions, cancellations, changes, etc. can be easily communicated with Drupal. You can use its powerful and flexible CKEditor to create media rich content.