I am in the market for laptops while also contemplating whether I should assemble a desktop instead. Put simply, I am researching the computer market a lot these days, especially processors.

Just last week I went to a computer store to inquire what’s latest in the market and came back unsatisfied. All stores that I visited pitched me Intel’s 10th gen processor, which they so righteously boasted was faster than the previous-gen chips.

Not to mention, when I asked them what difference the generations made, 90% stores said that “advanced gen chips are faster”. That’s couldn’t be it. I mean, apart from speed, there has to be some other selling proposition.

Building your own PC or Server

You might want to read this article if you are building your own dedicated server or just a computer. Even if you aren’t building any, you might still want to read it – a little knowledge won’t overstress your brain.

So – back to the story – I came home irate. How come the people who are selling computers not know the basic difference between processor generations? So I decided to do a little digging on my own, and here’s everything I found out that was worth finding.

The Beginning of the Entire Misconception

Most people think that i3, i5, and i7 correspond to the different generations of computer chips. Well, they don’t. Intel is running all these processor lines simultaneously and there have been as many upgrades with i3 as there have been for i7. Therefore, do not have an inch of a doubt that i3 is obsolete and i7 is the newest kid.

Intel has been naming its processors differently over the years. It all depends upon the architecture. Sooner, Intel realized that the pace at which it is innovating (more on that later) it will soon run out of names. So there began the naming convention i3, i5, and i7. Intel has rolled out i9 as of late.

So, here are all the major chips that Intel has released over the years-

As might be clear from the above table, the ‘i’ series is indeed the latest addition to the Intel’s processor family.

The concept of generations arose primarily after the Core i series. The micro-architecture being the main difference between processors of different generations.

A Chronology of All the Generations Before we begin, know that Intel has a weird naming convention, which you’d anyways know in a while. Each gen processor was given a unique name and marketed accordingly. Nehalem was the successor to the initial Core architecture. Although advanced for its age, it lacked certain capabilities like overclocking (more about that below), efficient pipeline and several other things.

Production of Nehalem started in 2010.

It relied on a 45nm process (which means two transistors inside the semiconductor were packed at a distance of 45nm from each other). The previous gens used 65nm and 90nm chips so Nehalem was significantly faster due to high transistor density.

It also reintroduced hyper-threading which Intel had decided to omit from the i3 series.

Introduced a year later in 2011, Sandy Bridge was set to replace Nehalem. It used the 32nm process instead of the usual 45nm Nehalem. The average performance in Sandy Bridge went up by approx. 11% compared to its predecessor.

Despite being a generation more advanced, Intel decided to keep most things of Nehalem intact in Sandy Bridge. The same old 64KB L1 cache and 256KB per core for L2 cache featured in the 2nd gen as well.

Ivy Bridge was faster and more efficient than any of the previous generations because it used a more advanced 22nm process. This drastically increased the transistor density so more transistors could be packed in the same volume.

The 22nm architecture was said to consume 50% less power and worked 25% to 68% better than the previous gen Sandy Bridge.

However, despite that, Ivy Bridge had one big problem. It emitted a lot of heat, and was thus noisy because the fan had to run more revolutions per second.

Intel was on a spree of upgrades, rolling one out every year. In June 2013, Intel released yet another series of processor named Haswell. Haswell had the same old 22-nm architecture and only marginal performance improvement of over 3% to 8%, which, in some cases, were far beyond noticeable.

It only sported new sockets, DDR4 technology and new cache design. In my honest opinion, Intel clearly underperformed this year, delivering less-than-acceptable performance at a higher price than normal.

The only benefit that I find worth mentioning is the low battery consumption of Haswell, making it ideal for ultra-portable laptops and other devices.

So far, Intel had been tweaking with the performance solely based on its manufacturing process and 5th Gen Broadwell was no exception.

Broadwell was released in 2015 and used 14-nm process technology. With the 14nm architecture, Broadwell became the smallest and the densest chip Intel had made. Intel further claimed that the Broadwell helps improve the battery life for as long as 1.5 hours.

Intel did not do much in the coming generation. It only redesigned its 5th gen processor and remarketed it as 6th Gen.

The 7th gen processor, which Intel codenamed Kaby Lake, was introduced in 2016. Kaby Lake was a refreshed version of Sky Lake architecture. It had several power improvements and enhanced graphics architecture for 3D rendering and 4K playbacks.

In the year 2017, Intel had introduced a refreshed version of its Kaby Lake processor. This 8th gen processor wasn’t much different than the preceding 7th gen. It had better 8th generation chipset and support for DDR4-2666 RAM but at the same time lacked the DDR3L Ram support.

Coffee lake line of processors could be as hot as coffee, figuratively speaking. It was introduced in late 2017 and Intel packed in its bundle the core i9 processor.

Coffee Lake primarily targeted increasing the number of cores, breaking the previous barrier of 4 cores per CPU and packing as many as 8 cores. 8 cores per CPU not only means a lot of performance but also an equal amount of heat dissipation.

Intel had to integrate the heat spreader (HIS) with these processors because they were radiating enormous amounts of heat.

Coffee Lake used the 1151 LGA sockets with altered pinouts to support 4 cores per CPU with L3 cache up to 16 MB.

Heat generation became an issue in 9th gen chips so Intel had to come with another upgrade and it did so with a bang. 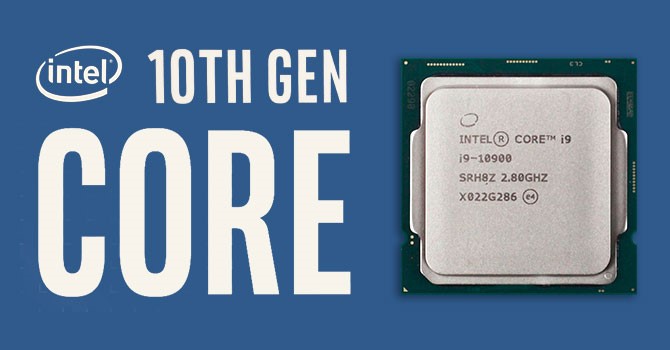 The 10th gen processors were not only more advanced but also better than the 9th generation chips. Although released in late 2017, the chip came into production only in 2018.

Ice Lake is being produced as the 2nd generation of 10nm processor from Intel.

They not only use BGA1526 sockets but also have integrated support for Wi-Fi band 6 and Thunderbolt 3.

Tiger Lake is yet to be announced. As of now, we cannot be sure when or if this processor will be launched. However, the speculations are that the chips will be entirely based on 7nm architecture or refined with 10nm technology. There are gossips that the 10nm tech will have performance gains up to 30% compared to Ice Lake. Intel is also planning to bring L4 cache with this technology to boost the performance even further. The difference between Intel Core i3, i5 & i7 processors

The biggest difference between these processors is the number of cores packed in each. Most i3 chips are dual-core, while several i5 have four cores. Many late-model releases of i5 and i7 have six cores and some high-end i7 have eight.

Besides this, the processors also support over-clocking and turbo boost.

We told you that we’d discuss overclock and turbo boost in the later sections. The time has arrived.

Read from the image below –

Most Core i7 processors are better than most i5 CPUs

Most i5 CPUs are better than Core i3 processors

The 3, 5, and 7 nomenclature is simply used to indicate the relative powers of CPUs. Core i3 does not mean it has 3 cores, nor does i5 have 5. As I have already told you most i3 CPUs have two cores except for 8th Gen Coffee Lake which has 4.

If you are building your PC for the first time, you should bear in mind the amount of performance you need.

In a nutshell, these numbers (3, 5, and 7) indicate where the CPUs sit relative to each other. That is to say, they give consumers an idea of how much performance they should be expecting from each chip.

Intel Core i3 is suitable for basic things like browsing, typing and low-resolution streaming.

Intel Core i5 is for those who need performance and run resource-intensive tasks.

Intel Core i7 would best fir those who do high-end gaming and video editing.

You shouldn’t stick to these connotations because they are not gospels. Advance i5 CPUs can easily outperform older i7s. Same goes for advance gen i3 and obsolete i5s.

The more cores there are in a CPU, the more tasks can be served at one time. However, you won’t be able to notice any difference in single-thread applications. It is the multi-thread application where you’d notice the difference and multi-cores will most certainly shine.

When the number of cores is equal, clock speed becomes the decider of performance. Higher clock speed permits the CPU to process more bits per second. But at higher clock rates, the CPU tends to produce more heat.

Thus, during overclocking all the cores at once, you may have noticed that the max clock speed is lower than overclocking in a single core. Here’s an example.

This brings us to the second most important thing you would want to keep in your mind. Faster is not always better. Your choice comes down to what you want from your CPU. If you use your computer for browsing and other lite tasks, I do not see a reason why you should go with a high-end CPU in the first place.