Just when the nation was recovering from the whole Kashmir 370 havoc caused due to internet shutdown of 145 days, very soon came the CAA protests. With Kashmir been deprived of the special status been enjoying since freedom it also registered enormous losses due to shut down of the broadband facilities. The government’s decision came down as a very tough decision for the state as along with internet facilities, calling facilities were also shut down for some time. With this Kashmir did set a benchmark of being the 1st land on the earth to face internet shutdown for around 150 hours. The nation was able to recover from this blow when the government announced the CAA. The feeling of the secularity of the nation got hurt at such a deep level and as usual, people came up with their views and incendiary comments were all over social media in no time. Seeing the impact and at what level it was touching deepest cords, the government was left with just one solution to shut down the internet in the regions where there was more activity registered. Just one decision and it turned down millions of business.

“A loss of Rs. 24.5 million per hour unshackled the telecom industry”

The revenue losses to internet service providers and telecom companies is unprecedented. The internet shut down in almost 18 districts at one point of time recorded loss of $350,000 of revenue per hour as per the records. The actual figures are always more which is mostly dominated in the northern Uttar Pradesh state. Big giants of the telecom industry joined hands with the government to maintain “law and order” in the country. Each telecom company is going through a loss of INR 1.5 Cr daily as confirmed by the director-general of Cellular Operations Association of India (COAI), Rajan Mathews. The biggest concerns of the telecom companies that most of the Indian consumers are the prepaid ones. This is not at all justified on the grounds of consumer rights.

The Indian government has been famous for internet shutdowns but this time things escalated to some unaccountable level. In the age of cloud computing, India is under the internet blackout. If we count in hours, then approximately 4000 hours the country was incredibly stuck. Innumerable businesses irrespective of their domain have faced losses. Although IFF (Internet Freedom Foundation) was constantly working with the lawyers to take legal actions if any adverse impacts come forward due to internet shutdown. 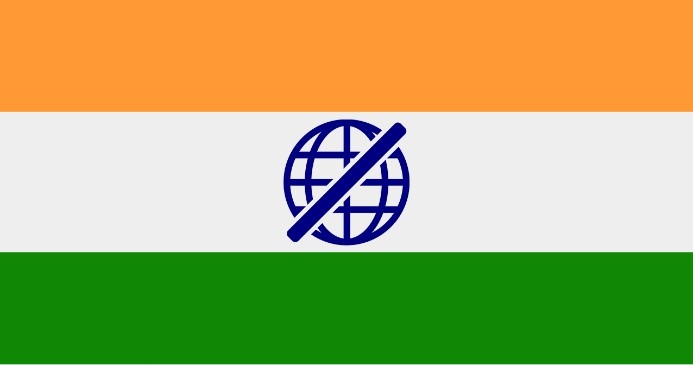 “This New India, not sure if leading in the direction of democracy but definitely into digital obscurity”

Figures speaks for themselves

The major blow struck the e-commerce websites and specifically for Amazon, Flipkart etc. Amazon alone sells Rs. 750 crores of only smartphones, now you can guess the per hour sale of these websites. It was natural for these websites to bear the losses in billions when their whole business runs through internet. “Loss of India due to internet shutdown is anomalous”

According to Darrell West, Brookings Institute, India marks to be on the top in terms of cost incurred or lost due to internet shutdown. There is this tool named COST (Cost of Shutdown Tool) is an online policy instrument that can estimate the economic impact of internet shutdown or for that matter any kind of online restriction in no time. This level of longed mobile internet shutdown for 12,600 hours costed around $3 Billion.

Internet was being started being misused by anti-national elements. The really concerning situation was that this was all happening in the national capital region where the largest democracy resides and is the major attraction for the e-commerce industry. Biggest investors and consumer base getting mixed signals when at the same time India aiming to become a 5 trillion economy, with all these internet shutdowns this dream is nowhere near to reach.

“Other brisk businesses like online deliveries, cab services and other entrepreneurs impacted drastically” “Youngsters fulminating over internet shutdown in the age of seamless connectivity”

30% decline in online food delivery is recorded which is definitely a steep decline without any doubt. The big giants like Swiggy and Zomato deliver around 1.4-1.6 million orders. In the midst of this when the internet goes down, lakhs of business are hampered and making people irritated.

Online grocery websites like Grofers and BigBasket were also a part of this disruption. These companies have built their businesses on the faith of delivering groceries in no time. The threat that the shutdown posed on these websites agitated the owners and the common people to their innermost core.

“In the months of festivities like December, internet shutdown struck the hospitality sector by a substantial blow”

When the nation’s hospitality industry was prepping up for increasing revenue during the longest festivity season, CAA internet shutdown appeared as a curse. Tourism and hospitality industries go hand in hand. National and international tourists avoided this whole festivity season as it the issue now was more about the security of the tourists. When the nation is not sure about its own citizens, it’s impossible to make commitments for security of the travelers. Among all the states, Assam faced the worst hit due to the ongoing protests. According to the Assam state’s tourism department it has already faced a revenue loss of INR 400 crores. When the state has the potential to collect a revenue of approximately INR 1200 to 1500 crores, it was only able to collect INR 300 to 400 crores this year. The whole onus lies on these protests for a two-third decrease in the industry which is one of the main sources of employment in a state like Assam.

“Most of the trains getting cancelled and thus creating a chaos”

Imagine yourself as a tourist who has already booked the ticked and done all the prior bookings online months before is getting notified about the cancellations suddenly. Sounds tragic, yes obviously it is.

Protestors are busy protesting, government as usual focusing on the bigger picture. But what about these e-commerce enterprisers who faced this serious critical position. The best line which I can think right now is-

“When the two bulls fight, it is the grass that suffers”

It takes a lot of time to recover losses when they are in millions. The losses can be recovered in some months’ time as the generation is fully digital. But the entrepreneurs who are new and amateur in the digital or e-commerce field get demotivated and thus this leads to shutting down of innumerable startups and breaking several dreams.