As virtualization is gaining great acceptance across all core-IT firms, CEOs are making all serious attempts to make it more holistic – putting their best foot forward to implement it at each level. Application and storage are the two key subjects where virtualization has nailed its presence, and ostensibly on good notes. Now, it’s the turn to enter into newfangled zones to make best out of the virtualization technology. Networking seems to be a thrust area where virtualization can benefit businesses with discrete needs.  Many IT leaders believe that network virtualization will be a great deal for the organizations than its conventional server virtualization lineup in the near future. To put into perspective, network virtualization can beget an array of benefits, provided it has been complemented with righteous execution approach. The current market scenario suggests this game-changing approach has been deployed in full production, at scale, by a host of the largest cloud hosting service benefactors, global banking firms, and data centers across the world. 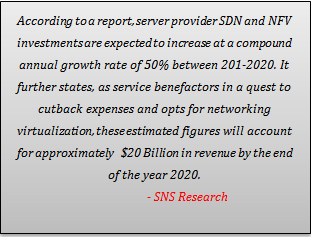 Networking virtualization is a pool of networking hardware – routers – and switches that are configured and managed through software. Characteristically, the brilliance is derived from the software and not from the separate hardware equipment.  The two valuable components of any networking basics are router and switches that enables connected devices to communicate smoothly with each other, including with other networks too.  To determine the way network gets operated – understanding of switches and routers should be initiated at the first place. The network operates by establishing a connection between computers and peripheral devices with the help of the two main networking basics, namely switches and routers.

Comprehend why and where you wish to implement before you choose to practice it. Are you eyeing to reinforce security of your data center, or keen to revitalize your IT operations? Fed up with downtime and want to put a lash to this crippling issue? Well, you can select any from the above to virtualize in order to achieve the desired objectives. Else, you can opt out for holistic approach to accomplish all of them. Holistic approach implies – taking virtualization across your entire network.

Micro-segmentation: According to the Techopedia, micro-segmentation is a kind of process that intends to segregate a collision domain into multiple segments with an aim to augment efficiency and security of the network. Collision domains are logical sectors in a computer network wherein packets of data strike each other. This kind of segmentation when performed with the help of a switch curtails the number of collision domains. Now let me quickly acquaint you with the fact that how network virtualization aids micro-segmentation. Today, millions of dollars are spent to deal with data breaches, out of that 3 to 4 breaches have a direct impact on company’s bottom line. It has been reported that many of the CTOs encounter risks with this legacy system as it deploys firewall controls and security for east-west traffic within a data center facility that accounts for approximately 80% of entire network traffic. Well, by going by this cutting-edge approach, the need for firewalls for each VM (that is a requisite for micro-segmentation) gets reduced, which entails cost-savings and boosts business efficiency.

In today’s competitive world, saving every second acts as a bountiful practice as the time and efforts saved here can be utilized on other critical aspects. Practically, manual process can be an intricate and time-imbibing specially when related to deployment and management of hardware-based networks. According to research conducted by a leading firm, more than one third of network outages occur owing to human error. Herein, network virtualization helps in automating various tasks allied to network – right from the configuration to provisioning and management. In addition to automation, it also encompasses several orchestration capabilities that distribute network solutions to VMs. To directly highlight its benefit – network virtualization fastens the time-to-market for new critical software applications and paces up the IT delivery process. 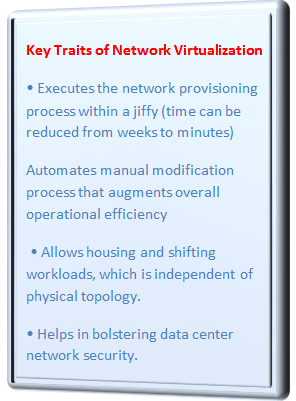 A competent organization is the one which possess the ability to withstand in the bad times. That’s why it is important to have right technology and strategies in place that can take hold of your business applications when encountered with unwarranted downtime issues. Here, network virtualization not only helps in faster recovery and curtailing downtime – it also has the potential to foster the disaster recovery planning. This kind of new approach allows IT administrators to replicate complete network including security protocols for any app within a jiffy. These replicated network and security services can be made available in standby mode at the time of disasters. This in turn reduces the impact of outrages on business’s bottom line.

Apart from this, with network virtualization, existing network investments like configuration of existing IT systems (in the case of merger and acquisition), segregation of tenants can be optimized so that they can leverage multi-tenant clouds, and make most out of their deployed servers.

IT administrators embarking on network virtualization procure a whole host of benefits of new architectures with respect to end-user experience and provide capabilities to foster new revenue generating services. It allows IT team to focus on new projects and business contingencies for holistic development by automating and streamlining most of the business processes that operates on a data center network.

One thought on “Network Virtualization: A New Approach to Optimize IT Operations”